On May 7th, 2016 a Tesla Motor Model S driver, 40 year-old Joshua Brown, was killed while using Tesla’s Autopilot mode. Driving on the highway, the bright sky confused the car’s sensor system, which failed to activate the brakes when an 18-wheel truck and trailer crossed the highway in Williston, Florida. The Model S drove straight towards the trailer, attempting to drive under it. Its windshield collided with the trailer and tore off the vehicle’s top, according to a police report. The car kept driving under the truck’s trailer and off the road to crash through two fences and into a power pole. Truck driver Frank Baressi was not harmed but Brown died at the scene due to his injuries.

Owner of Nexu Innovations, a technological company, and a Navy SEAL for 11 years, Joshua affectionately named his Model S “Tessy” and recently uploaded a video to YouTube of his car’s Autopilot system avoiding a crash on an interstate. Brown wrote, “Hands down the best car I have ever owned and use it to its full extent.” Tesla founder Elon Musk tweeted the video, which reached a million views.

Tesla made a statement after the incident and within it it reminded drivers “among all vehicles in the US, there is a fatality every 94 million miles” but the first 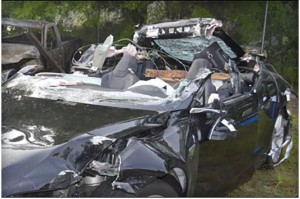 Tesla Autopilot death occurred within 130 million miles. It reminded drivers that Tesla’s autonomous features are far from perfect and require drivers to keep both hands on the wheel at all times. Drivers must “maintain control and responsibility for your vehicle.” The company stressed, “When used in conjunction with driver oversight, the data is unequivocal that Autopilot reduces driver workload and results in a statistically significant improvement in safety.” Tesla later described Brown as “a friend to Tesla and the broader EV (electric vehicle) community.” With human error accounting for 94% of car crashes, that statement is likely true.

However, many Tesla drivers have posted videos of themselves doing various things behind the wheel while their car drives in Autopilot, including napping and playing air guitar. Experts fear more crashes will occur while people use the unrefined technology improperly.

What happens now to Tesla and self-driving cars?

Kelley Blue Book analyst Mike Harley believes autonomous technology may be responsible for more deaths as companies advance the technology. As people struggle with the idea of self-driving cars, this tragedy will prove a setback in consumers’ minds. Tesla’s stock fell 3.2% ($6.77) hours after news about the crash was released.  Before this accident, Musk hinted that the new Model 3, targeted to middle-class drivers at $35,000, might feature autopilot technology.

America’s National Highway Traffic Safety Administration (NHTSA) is investigating the accident and sent a nine-page letter on July 8th with questions the company must answer by various due dates.  Additionally, the US Securities and Exchange Commission (SEC) may be opening an investigation against Tesla. The SEC investigates whether or not Tesla broke the law by failing to report the accident that occurred on May 7th to investigators until after May 18th and May 19th, when the company sold $2 billion in stock.