How Your Body Responds To Heat – Heat Index Explained

How Your Body Responds To Heat
Summer officially started June 21, but if you’ve spent much time outside lately, you could argue it started well before then. The hot temperatures are more than just uncomfortable though; they can be downright deadly. Keep yourself and your loved ones safe this summer with this guide to dealing with the high temperatures and hot conditions.
Know the Threat
The first step in keeping yourself safe is knowing just how the heat affects you. Essentially, your body is constantly trying to regulate its internal temperature and keep it consistent. As it starts to rise, the body responds by trying to release some of that extra heat in two main ways: by sending more blood to the skin’s surface and by sweating. Circulating blood to the skin works to release heat if the air is cooler than the body temperature AND if the skin is exposed to the air. But if the air is too warm or the skin is covered, this method doesn’t work. Sweating is the next method, and it releases heat when the sweat evaporates. If the air is too humid or if you’re wearing tight, water-resistant clothing, the sweat won’t evaporate and your body can start to overheat quickly. Sweating also releases large amounts of fluids and salts, both of which need to be replaced or the body can start suffering dangerous side effects.
Watch Out for Those at Greatest Risk
When the heat gets extreme, anyone can be at risk of heat-related illnesses. However, some people will be in greater danger.
Understand the Effect of Humidity
Heat illness isn’t just a product of high temperatures. Humidity levels can make it seem hotter than a thermometer says it is. The National Weather Service provides a Heat Index scale to provide a better indication of what the weather feels like, and how dangerous it is. As you can see, temperatures in the mid-80s can act like temperatures in the 100s with high levels of humidity. 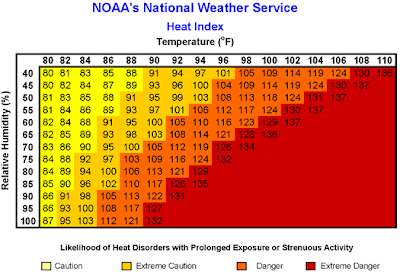 Don’t Leave Kids in Cars
One of the biggest dangers in hot weather is the inside of cars. The interior of a car with the windows up in 80°F weather can get up to almost 100°F in just ten minutes. Dozens of children die every year from heat stroke due to being left alone in vehicles. Don’t leave children in alone in your vehicle!
Prevent Illnesses
The best advice is to avoid prolonged exposure to hot weather—stay in cool areas during the hottest parts of the day, and move indoors whenever you start feeling the heat. If you must be outdoors in the heat, follow these recommendations:
Treat the Symptoms
There are four common medical problems caused by too much exposure to the heat: heat rash, heat cramps, heat exhaustion, and heat stroke.
Heat rash is just what the name says: a rash caused by heat. It looks like a red cluster of pimples or small blisters, caused when the skin becomes irritated by excessive sweating. It’s most commonly found where sweat tends to form and have trouble evaporating, including on the upper chest and neck, in the groin, under the breasts, and in elbow creases. The treatment includes:
Heat cramps are a muscle pain, often caused by strenuous activity in hot weather. They’re usually the result of losing too much salt and fluid due to too much sweating. The treatment includes:
Heat exhaustion is when the body starts breaking down because it can’t control its internal temperature. Symptoms include heavy sweating, paleness, muscle cramps, fatigue, weakness, dizziness, headache, nausea and/or vomiting, and fainting. Also, despite the heat, the skin may feel cool and moist. Breathing will likely be fast and shallow and the heart rate will be fast and weak. It only takes a few of these symptoms to indicate heat exhaustion. It can also come at the start of the day, as accumulation from several days of being in hot conditions along with not enough fluid intake can cause it. The treatment includes:
Heat stroke is the worst of the heat-related illnesses. This is when the body can no longer cool itself, and it begins to break down entirely. Not treating heat exhaustion can lead to it, and the body temperature can rise to 106°F or higher in as little as 10-15 minutes, which can cause damage to vital organs, including the brain. If you expect heat stroke, seek immediate emergency treatment. Not treating heat stroke can cause permanent disability or death. There are several signs that could show heat stroke, though not all of them need to be present:
The treatment is to quickly get the person suffering from it to a cool place and to get emergency medical help. Cool the person down as quickly as possible, usually done by soaking them with cool water.